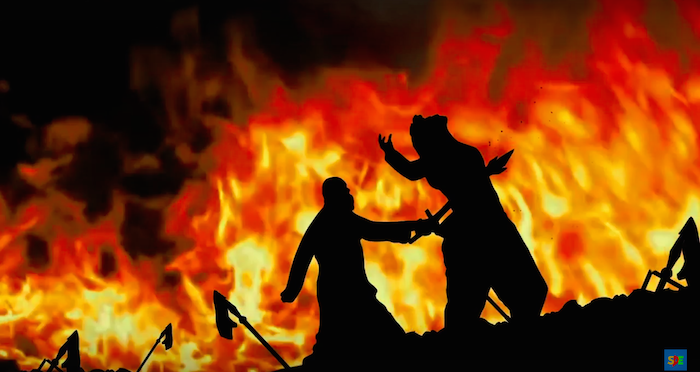 To save Bahubali from seeing an India where a bunch of goons and the power they possess over the impotent masses could make Kattappa bow his head in shame day after day. While the state watches silently or cheers from the sidelines.

It is not just the story of Sathyaraj, the real life Kattappa of modern times who was forced to take back his words as the so-called Kannada pride was at stake. Even though ordinary Kannadigas do not bother and in fact are also sad at this forced apology as it is nothing more than another political mafia inspired wound on two brotherly states. And Sathyaraj had to do this to safeguard the investment of his film’s producer.

It will not just be the high and mighty as Aamir Khan, Shahrukh Khan, Karan Johar in Bollywood who would need to apologize for acts committed what goons and trolls decide as sins.

It will not just be corporate heads, renowned novelists, intellects, even retired army officers, all who will have to bow down to the pseudo nationalist- the ones who gives moral science lectures and decide what is right or wrong for the nation.

And common man? He just does not have the power to face the mob. He could easily pay with his own life in a matter of minutes. Even as a silent spectator or a bystander.

From virtual reality of social media to real life, the ‘majority’ mafia follows you everywhere. And the state, the law and the administration supports them.

If you say anything against any religion, you are hurting the religious sentiments of a section of society and a legal case can be registered against you. Off course if you are a common man, you can be put behind bars if you are lucky since outside you could be easily bludgeoned to death.

If you say anything against the state or question their acts of governance then you could be declared anti-national and can also be booked for sedition. That again if you have luck on your side because the state sponsored mafia is capable of taking the law in their hand and giving you a bloody lesson of patriotism.

If you call cow an animal which is a part of natural food chain or even point a finger towards it when her Holy highness rests in the middle of the overcrowded Indian roads, you should be ready to face cold hate in the eyes of the resurgent Hindus standing next to you. That is if you are not beaten blue by the cow vigilantes who can instantly emerge from nowhere and who are professionally trained to ensure that they break your bones and make you disabled for life and yet not get booked as they know how to avoid external injury.

India has changed and how in the last few years!

Cow vigilantes are now considered at par with true nationalists as Bhagat Singh. Incidentally Bhagat Singh was an atheist. Not that it matters even though he would have perhaps deserted the idea of fighting for this nation if he would have known what he was creating.

And you have no right to express your views nor the strength to face the growing powers of the Hindutava brigade.

Alas what started as a show of strength is now capturing the minds of the masses.

Educated men and women in the name of Hindutva pride or resurgent India are falling prey to the propaganda and becoming blind followers.

Reason and thought is dead. Blind faith in the Junta is the rule of the game.

And somewhere in these useless discussions about Azaans and the noise or the melody that they create, about cows and the benefits of their urine and dung, about Ram Mandir and Babri masjid, about national anthem and nationalist pride, India has lost the agenda of governance and is becoming a banana republic as detestable as the states founded on religious grounds.

The Hindu Talibanization of Indian state has well and truly become and in a few decades, if not years, India will become the very Hindustan that our founding fathers never wanted.

Bahubali is dead. And so are the freedom fighters who built this nation.

And so is the very idea of tolerance and freedom they fought for and desired.

Would sane voices remain islands of dissent or they be blown away in this deluge of Hindutva madness?

Alas the answer is dark as there does not seem to be any alternative up in the horizon.

Kattappa, the soul of Bahubali thanks you for your act of kindness.

And yet, one day, it will rise from the ashes and save India from this despair.

One day my friend, secularism and tolerance will not be the dirty slangs that they have been made out to be and ‘vasudeva kutumbakam’ or universal brotherhood will again be accepted as the ethos of this nation.

My soul would wait for that day in this lifetime or beyond. After all, this land still belongs to my grandfather and many like him who fought and gave up their lives not just for a piece of land but the very idea of freedom of soul and right of speech.

I wait for that day grandfather. I will work to bring back that day- Bahubali!