Like readers of this blog, I was born in a human body and since I never remembered what religion I had followed before my birth, if at all I did follow one, I had to go by what fellow earthlings made me to accept. They said that you are a Hindu, so I became one. They added, you are an ‘Arya Samaji’, so I became one and joined my family in chanting Vedic hymns to praise, what was named – ‘God’.

Over the years, I came in close contact with various other religions. I studied in a Catholic school and recited psalms, married a ‘Sanatani’ Hindu lady and till date hear and see her worship “Gods” and “Gurus” in various shapes and forms, have lived in Indonesia and also in various parts of Western UP bringing me in close contact with Islam and now in Canada, Sikhism has influenced me as much as the delicious “langars” that satisfy my taste buds.

During this time, I also studied Osho, Buddha, Geeta, Ramayana, Bible, Zen to try and find why we were all so confused. Finally, I realized that religion was the greatest divisor that was created by manipulative men to control others and decided to renounce all forms of worship.

I also understood that there was no need to search, praise or fear any God as we ourselves were his form. “Aham Brahmasmi”- I am God, put to rest all journeys and I could easily talk to him while looking at myself, yourself or any other soul in the world!

During this journey of self realization, I decided to renounce Hinduism as I wanted to be free from any bondage and also despised Hindu zealots, leaders and fanatics. God, how much I hated the sight of a priest using his skills to instill undue fears in simple minds to enable his living or control their souls.

Over the last two decades, thanks to the economic and technological advancements, Indians have transformed into people who have greater self esteem. Result- they searched for all possible avenues to showcase their newly found confidence. And what better way than religion? Being religious and carrying out religious activities gives people a very strong emotional high, the greatest id booster.

A priest’s ego is often far bigger than that of a businessman. After all, his commodity is God!

And then the age old Indian curse happened. Religion got mixed with politics and slowly and steadily, started taking control over the economic, political and social structure of our society. Like many Indians who could understand what was going on but thought that this was just another phase of the ever developing Indian story, I too ignored this phenomenon. But to our own peril. What these forces lacked for decades was a strong leader who unlike Vajpayee, well and truly believed in their cause and knew that greater power can be got over the human psyche when one is manipulated on religious grounds. When reasons cease and faith rules, then men can easily be herded as sheep.

And then they got not one but a deluge of them. Today, India is becoming a really scary place to live by any standards, especially if your views differ from that of the religious and political majority. Some where their faces are being painted black and their bodies beaten blue just because they offer dissenting voices.

Some where all kinds of stupid meat bans are being carried out or even men are being murdered in the name of protecting religious sentiments or animals.

Someone gives a ‘good’ character certificate to an ex-president and a great scientist and marvels at his achievements which he achieved “in spite” of being a Muslim. Anybody who is against this form of ‘Hindutava’ is labelled anti-Indian.

So what is the solution? Can we fight these forces? No, since at the end of the day, sword kills! We will not fight but will bring a paradigm shift. We will work to change these people as we still believe in the God that resides in them and who will rise from his slumber.

It is time to be a Hindu again! Not just as an entry in the blog of religion but in letter and spirit. It is time for us to return to the real Hinduism and teach its lessons to our fellow misguided brethren. It’s time to read from the ‘Hindu books’ and show them the mirror.

(He who bears no ill-will to any being, is friendly and compassionate, free from egoism and self sense, has poised mind in pain and pleasure, is forgiving;)

(He who neither rejoices, nor hates, nor grieves, nor craves, he who has renounced good and ill; he is my true devout worshipper and is my beloved)

This my dear Hindus is what Krishna told us. Then how can you hate me so much? And I am not referring to the illiterate public who can yet be ruled by scheming religious zealots.

I am referring to people like you and I who are reading this column! How can educated men and women on facebook, twitter, news columns, Television, in houses, pubs, community gatherings, religious places,…. carry the burden of so much hatred and spew so much venom in the name of religion? How can we even label acts of protest of writers and authors who wish to ensure that their right of expression is protected as anti-national? How can we not see through the game plan of political leaders, power mongers and religious leaders to rule over us by manipulating our psyche and by using fear as the key to reign over us?

It’s time for us to do away with the polarities that we so easily divide our society into and remember what Krishna always said that only he who rises above the duality of thoughts and actions, who stops characterizing people as good or evil, can find truth and be his beloved. 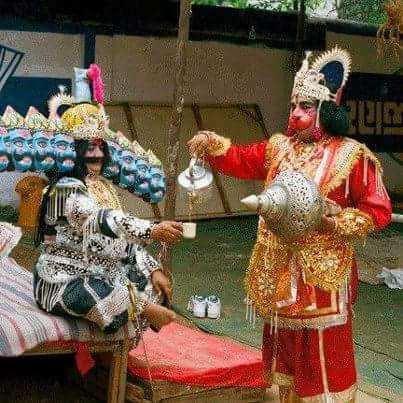 For long we have given hatred a chance and have rejoiced killing Ravana year after year!

For me this modern “Ramleela” is the real essence of Geeta or Vedas.

It is time we decide to do away with the killing of Ravana, or eulogize the triumph of Good over evil and allow Ravana and Hanuman to sit together and carry out a ‘Real Chai pe Charcha” and sort out their differences with a lovely camaraderie.

This festival of lights, let us not ignite fires outside but lighten up our souls, shed all hatred and be a real Hindu in accepting all, as in the tradition of this ever accepting nation.