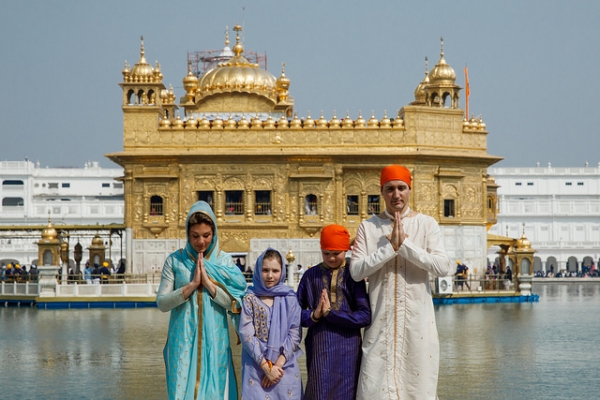 If I was Justin Trudeau, I would not forgive Indian politicians and media for a long time. Perhaps he will but as a Canadian with Indian roots, I definitely will not. Ever.

But mark my words. Trudeau’s India visit will turn out to be a long term relationship disaster for India and not for him. As an honest, liberal, positive and a truly warm Canadian, he need not change himself as his soul will shine through all this dust. But India is only entering a cul-de-sac while welcoming darkness in letter and spirit.

True Justin went overboard. As he sometimes does. Those heavily embroidered and garish Indian tops called ‘Kurtas’ were an eyesore even to most Indians. We never wear such fancy dresses but for some special function where it is chic to get into the Indian look. Perhaps he was either misguided by his coterie of South Asians who love their Bollywood movies or by the huge applause he gets when he wears such costumes at South Asian events in Canada. After all it is a pleasure to the South Asians to see a White man, a ‘Gora’ in local lingo, wear and dance to the Indian tune. Here in Canada it is genuinely considered a mark of respect to the community and a desire to accept their culture. India mistook this for Trudeau’s weakness and showed their boorishness.

In fact it was evident right from the start that the Indian political elite which hates the liberal agenda and which has turned right wing/conservative would not accept Trudeau. They not only sent only a junior minister to receive him but also ensured that the media coverage given to him was low and negative. Slowly the plan was put into effect, his dresses were commented upon, the credentials of his trip questioned, his comments unwelcome, his guest lists questioned and lo and behold, we had a warm trip turned into a PR nightmare.

I would not go into the details of how he was treated by Indian and thereafter Canadian and foreign media. How he was made to look like a fool when he was just being a warm human. I would rather focus on what happens here after and let India know about the blunder they have done.

Here was a guest, who as per Indian traditions was to be treated like a God, who comes with all humility always bowing down to the local traditions even dressed in their attire to please the locals, who shows due respect to all the shrines and institutions revered and loved by the Indians, who even takes his family along and makes them dress the Indian way, who knows that he will face ridicule at home especially from the political opponents baying for blood ready to portray him as a weakling and Indians, you treat him like this? What is wrong India?

How many times have you tried that the World leaders come to India and respect the Indian ways? How happy you have been when occasionally they have worn Indian attire for a function and grooved with you? How many times have you hoped that they genuinely like your cuisine, your culture, your music and your own self?  And when a man, a nation’s leader, whole heartedly opens up his soul and gives you a warm hug, you pull back? So what if he went overboard. Is it wrong to try hard? Seriously, are you kidding?

Trudeau will recover from all this. After all he did nothing wrong. But chances are India will see the famous Canadian cold for decades now.

Relationship between Canada and India may go into deep cold storage. Not just Canadians but countries world over especially in the Western world would be less trusting of India and especially if their political views differ. Definitely other world leaders would be more reserved in their Indian visits and never again would any Western leader open out as much as Trudeau did to Indian traditions and culture. If India wants cold treatment, so be it.

As for that so called terrorist invitation for a Trudeau event, let us review the facts there too. First the guest lists and invitees are not made by Trudeau or any political leader himself. If that be the case then thousands of politicians would be responsible for meeting past and present convicts,  animals in human skins, rogues and mafia. The latest being one Mr. Modi who had was just photographed a few days back with a scamster Modi. Second if FACTS serve me right, Atwal was convicted as a terrorist and served his sentence for close to two decades and has gone on record saying after his release that he regrets his action. He has already faced punishment for his crime and now walks free in Canada and does business there and has all the rights as any other Canadian. So much so that he was visiting India because India too removed his name from the black list and granted him visa. So how long would you keep crucifying a person for an act in the past? That way a lot of political leaders in India who were anti-state at one time should also be blacklisted for life. In a land which respects Valmiki as the convict turned priest who wrote the holy book, Ramayana! If anyone is to blame then it is India for double standards.

True Khalistan and its movement is dead in India as it should be and also does not ignite the minds of majority of Indo-Canadians any more. But the fact still remains that a large part of the Punjabi community that resides in Canada came here in large numbers in eighties and early nineties after seeing various atrocities committed to their near and dear ones at different times. The wounds have healed but the scars still remain for children who grew up without fathers, or men and women who suffered in their youth. These can only be healed by love and acceptance and not by hate and segregation. By showing your back to Atwal who has already paid for his sins, you alienate many other Indo-Canadians and rub fresh salt on old wounds. Alas, one should have expected that out of a new militant India and its rudderless media.

I only hope that Trudeau and the Liberal party does not take this negatively against the diversity in Canadian population today. The way Liberal party has welcomed immigrants, worked to enable equality, justice and acceptance in Canadian communities and enabled greater respect for all humans should continue.  His love for Indo-Canadian community must not get altered due to the foolishness of Indian media, which anyhow is semi-controlled by the Indian right wing politicians.

Honestly as an Indo-Canadian I am ashamed for the way India treated Trudeau and will thank Trudeau if he remains his true welcoming self still and brings no hard feelings home.

India you let us down once again. ‘Athithi Devobhav’- Guest is God looks like abuse after this ill-treatment to a warm Canadian. India has well and truly changed its colors for worse.

As for Justin, please forget this and move on. Thank you for opening your heart.

And yes the next time on Diwali or Gurupurb, Justin please bring out that Bhangra move again. We love it and will continue to do so. Forever.

Posted in New Canadian Media on 26th February 2017. Link below-