It’s holiday season and that time of the year when we can relax, rewind and of course as hopeless Bollywood buffs enjoy the moments of reel magic. As a serious Bolydict (short for Bollywood addict I guess) it has become an annual ritual for me to put forward my list of the Best of Bollywood. This list is based on the sensibilities of an audience desiring some great entertainment Bollywood eshtyle, good content and some gripping story-telling.

The year 2016 was the year of Women power and Bio-Pics or real life inspired films in Bollywood as would be reflected in the list below. Hopefully more stories would follow in years to come and I guess ‘Queen’ has shown the way that women empowerment is good business and greater entertainment (No pun intended towards Rahul Gandhi please). So here’s the list and go to your nearest DVDwala or streaming network and enjoy the magic-

This is more of theater than film, more of dialogues than screenplay, more of emotional upheavals than expressions. Gauri Shinde scores again after her classic English Vinglish as she takes us through the roller coaster life that a young adult experiences in today’ world. Alia Bhat is emerging as the actress of this decade and her talent is infinite. A scene in which she eats raw chilly to control her outburst would go down as cinematic magic. And with SRK as your shrink, there really is no reason to get well till the last reel!

A biopic or rather an inspired story from the real life of Mathunny Mathews who helped in enabling evacuation of thousands of Indians from the war torn Kuwait in the 90’s. A great story well directed by Raja Krishna Menon and ably enacted by Akshay Kumar. Mathews in his reel life character of Ranjit Katiyal would remain a part of folklore with this movie for decades to come.

An out and out Ajay Devgan movie with mesmerizing action sequences, great cinematography and outstanding visuals. A great masala mix all the way and some scenes and songs especially the title song sequence is hair raising even after watching it for the nth time. Bolo Har Har is perhaps the anthem song of the year sung with raw passion by Badshah. Just wow! After watching this, one can aptly say, ‘Mere dil mai basa Shivaay…..’

Sultan Khan or rather Salman Khan is the reigning King of Bollywood. Proved again by this action thriller directed by Ali Abbas Zafar. Need I say more! The top grosser of the year and the member of the 300 crore club in record time, this movie brought moolah as well as masti back to Bollywood with a bang, Bhai eshtyle! Oh yes, incidentally there is a story too but who’s interested when Bhaijaan is having a blast! 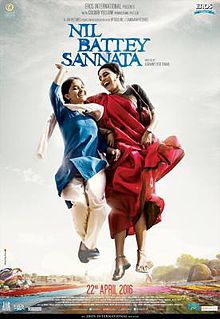 Did we say women empowerment? Starts with education I guess! And what about the hard working moms than their lucky children? Great idea and a beautiful adaptation by Ashwani Iyer Tiwari. Kudos! Loved every moment of this simple movie with an almost unknown star cast led by Swara Bhaskhar (Now don’t ask who? She really did a great job in Tanu weds Manu but that’s another story.) A must watch and an entertaining film with a great message!

Aligarh, a biopic on the life of a highly talented and eminent Prof Ramchandra Siras of Aligarh university who faced rebuke and undue sacking from his position due to his sexual orientation. It was an extremely complex theme ably handled by Hansal Mehta in a film which touches human heart. Manoj Bajpayee’ mesmerizing performance as Prof Siras backed by an equally touching portrayal of journalist Deepu Sebastian by Rajkummar Rao has made this movie a classic for the times. Indian cinema came out of the closet and matured in a day! And how! Hats off!

An almost real raw reflection of the Punjab of the times, high on drugs and low on life. A dark story brought to life by some awe inspiring performances by Alia Bhat, Shahid Kapoor, Kareena Kapoor Khan and Diljit Dosanjh. Abhishek Chaubey holds the sensitive story written by Sudip Sharma together while directing a painful film with humane sensitivity. Its strong images conveyed truly one of the very important aspect of film making- being a mirror to the society and what emerged broke our hearts into pieces as to how our youth has lost the way! And yet the triumphant human spirit soars in the end. Here’s to the Gabru Punjabi spirit who goes high on life than dust! Oh yes, Alia you rock!

So we had seen the men camaraderie umpteen times in movies like Dil Chahata Hai, Zindagi Na Milegi Dobara, Three Idiots….. What about women? That too in rural setting? That too talking about taboo issues like sex in a male dominated society? Even between ma-in-law and daughter-in-law? Seriously? Yes. Yes. Yes. And what a powerful story emerged! Leena Yadav’s magical direction was brought to life by the beautiful enactment of some lively characters by some of the most talented actresses of our times-Tannishta Chatterjee, Radhika Apte and Suveen Chawla. This movie could do to our transformed minds in less than two hours what thousands of words could not do in decades and centuries. Bravo! Radhika, yeh dil mange more!

Beyond doubt most of the readers would be surprised why Dangal is not rated as the number one movie when it is being referred to as the movie of the decade by a large section of the masses. There is no doubt that it is one of the most awe-inspiring movies of our times and lives up to the high standards of Mr. Perfectionist of Bollywood- Aamir Khan. Going by the spirit of 2016, it is both a biopic on the life of Geeta Phogat and her father/coach Mahavir Phogat as well as a showcase of women power and how an extra ordinary story can be created from an ordinary life when inspiration is backed by determination and hard work. This movie will be a classic and with its rural setting and the scent of ‘desi-mitti’ would be remembered by all and sundry for ages. Thank you Aamir and thank you Nitesh Tiwari.

It speaks volumes for the year 2016 when the top movies of the year are all about women or issues hidden in the closet. Pink- What can one say about this movie which shows male chauvinism of Indian society in its absolute raw form as it still exists even in the so called liberated echelons. Aniruddha Roy Chowdhury’ riveting direction and story-telling backed by an equally sensitive performance by the old horse and a true genius, Amitabh Bachchan created a gripping tale like never before. But the highlight of the movie still were the three leading ladies, Taapsee Pannu, Andrea Tariang and Kirti Kulhari and their defiant spirit. The strongest message of the film and I do hope that it goes to all Indian men who come in different shapes and forms- strangers, friends, family, spouse, acquaintances, colleagues, religious preachers, ….., was – ‘ No means NO! Respect No! And Yes to Pink!

Best supporting Actress- A tie between Shabhana Azmi in Neerja and Radhika Apte in Parched.

What a year 2016 was and what lovely cinema! Indian cinema moves to greater heights!

After all we would finally come to know- ‘Kuttapa neh Bahubali ko kyu mara?‘